The most savage tracks from their debut are undoubtfully the opener „Howling Volf“ and „She Pulls Her Gun“ where one of the craziest riffs ever heard plays the prime role. Mind-blowing combination of energy and force makes this album one of my recent favourites. I caught up with BBR through e-mail to clarify few questions I had on my mind:

Famous duo musicians, like Crystal Castles for example, have quite remarkable stories behind their first meet-up. How and when did yours happen?

Actually, we’ve got a really infamous coming-together of the band, a story that includes all the clichés. We started out as a schoolband, simply to get some extra studie credits – this was six years ago. It was a 10 piece band and we played a really bad coversong. From then on – without really discussing it – we started a five piece band and started writing our own songs from the start. One by one we lost members – or member lost us, we’re not quite sure about that, but we ended up deciding we should just make music with the two of us. It’s the interest in the same music and art-style that brought us together and works as a great combination for writing the music that we do now. Besides this we found out we’re highly ´telepathic´ with each other, something not every duo has. We´re one-minded.

Well, what I mean by that is that often we think the same way or even say same things. For example, very often when I call, Stefan answers „I was just about to call you!“. Also this works really well musically. For instance, when we’re writing a new song one day and come back on it the next, we would both have thought about it and express our thoughts to each another and more often then not we share opinions.

Your brilliant EP debut is full of energy – I have a feeling it doesn´t really square up with the French countryside-ideal. What were the reasons behind going there and record an album?

Most of the songs were written before we decided to record the EP in France. It’s the many live performances we did this year that made the songs really energetic. Of course we liked to play loud and full of energy from the start, but we also feed off the energy we get from really great live-shows and from the audience. We wanted to capture this energy into a recording. We found it difficult at first to find the right producer for this, but we luckely found it in our friend  Chris Hamilton.

That brings us to the story of France: We actually met Chris one year ago when he was playing with his band in our hometown ´Leeuwarden´. We were impressed by their music and we stayed in touch ever since. Earlier this year – in May –  we went on tour with them in England and we did a recording experiment with Chris in an old warehouse. We wrote and recorded The Electric Circus in only a few hours. Chris´ way of recording turned out to be just the way we had in mind and asked him to record or full EP in the summer.

Since Chris likes to record in odd places, he rented an old 12thcentury house in the countryside of France and invited us over. We were really excited about the idea to record in an ancient and abandoned place, where we could do whatever we wanted whenever we wanted. This way of recording was also a big experiment for us, since we recorded in a lot of different parts of the house, for example: the kitchen, a closet and even in the garden. We used the acoustic of the house (the kitchen sounds different then the closet, and we captured the reflecting sound of a wall) – which gives it really raw and pure sound. So basically, we could make as much noise and let off as much energy as we wanted in that little French place.

For this EP, did you have a choice of more songs or did you aim at these 6 energy-packed songs and nothing else?

We do ofcourse have more than these 6 songs when we play live, but we carefully chose these six songs for the EP to record. We wanted to make an EP within the theme of ´women and weapons´ which all of these six songs include in their own way.

„She Pulls Her Gun“ is undeniably the most savage and strongest of all your songs – especially the mad riffs towards the end. Splendid! Do you remember how it originated? How come it happened to be so wild?

To be honest, it´s quite complicated to explain since it´s the song we changed the most in its form. We can remember it started out with the guitar-riff (the one right before the chorus) and the desire to write a song in drop-D tuning. We changed the chorus quite alot and the version that‘s now on the EP was only written just before we recorded it.

It happened to become wild because of the theme around the song: we wanted it to breathe the atmosphere of a ´western stand-off`(the one you see in old dirty movies), but between two women. I think you can imagine what happens when you start visualizing the song.

Sure. The whole EP has this raw, violent-ish streak. I have to admit, it pretty fascinates me.

Glad you’re as fascinated as we are. We think it comes from our fascination of women with guns in movies, like Underworld and Resident Evil or Tomb Raider. We just like pretty women and dirty guns.

Contrary to that, the name „Battle the Sparrows“ almost feels like a parody of the whole concept.

The name actually came from the time we spent recording in France. Sadly, one day a sparrow flew with his little bird-head into the sidewall of the house and died. Since most of our songs are about battle’s/fights we decided to combine these two and dedicaded this EP to the little dead bird. R.I.P. little sparrow 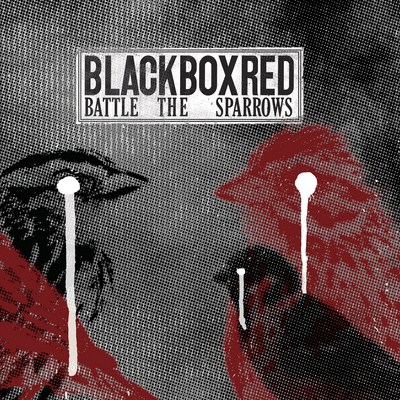 Were these lyrics influenced by growing up „far north in Netherlands?“

Actually, we’ve grown up in the main city of our province in the north of Holland. We´re still living there, it´s called Leeuwarden and it´s quite an uninspiring one so none of the songs or the style of music we make is directly influenced by the place we live in. But maybe, subconsiously it is influentual because it’s so boring.  What does inspire us are the movies that we watch, the music that we listen to and strange situations that happen with- or around us.

There is a huge anglo-saxon tradition of raucous bands like yours – but how about the Dutch music scene and its past?

Can’t say we’re really inspired by the Dutch music-scene. There isn’t that much of  DIY culture (in some parts of Holland it’s more lively, but certainly not in our area, which we find a bit saddening) and therefore we get our inspiration from cultures in other countries. For example the UK, where a lot of bands have a strong DIY mindsetting. Also Berlin and its street-art culture is something that inspires us and where we like to go to once in a while.

How big a part of your lives is music? I guess you have to make living by doing something else.

Music is the main thing in our life. But you are right about that one, we do have to make a living out of other jobs. For instance, Stefan works as a baker and I work as a bartender. Besides that we organize music-events and try to set up our own eventcompany. It’s pretty busy all in all, but it’s what we like to do.

How much were your affected by the „Grote Prijs van Nederland 2010“ contest?

It was a good opportunity and it helped a tiny bit to play in a bigger venue for a bigger audience. Besides that it hasn’t really affected us and nothing really big came out of it.

We can say that the Eurosonic festival in January this year was more influentual on us. We met alot of great people and got some nice gigs and festivalshows out of it.

Speaking about „establishment“: do you follow politics at all?

Sure we are influenced by politics, I think most of the creative persons are. Can’t say we follow every step they make, but when it comes down to cultural matters we sure find that an interesting subject and it does affect us. For instance this year the politics are cutting on cultural subsidises, which makes it harder for artists to make the things they want and to make a living out of their art.

And last but not least, what lies ahead of you? Do you have any concrete plans?

Also we’re playing alot of festivals over the summer, as well as in Holland as in Germany and who knows where else. We love going on tour, so hopefully there’s a lot more coming our way.